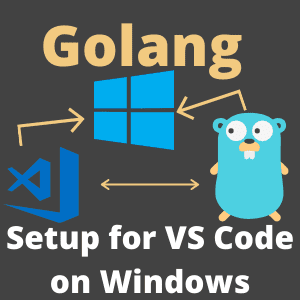 Welcome to Go language setup for Visual Studio Code on Windows, we are going to set up our development environment so we can code and work on go lang code on our computers easily, Let’s dive into it.

Once you navigate to Go’s download page you should select the appropriate windows installer for you. It looks something like this:

I’m downloading go 1.16 for a 64 bit Windows machine. This will differ slightly depending on when you’re reading this and what your windows version is.

Simply run it and click through the executable. Once it is installed you can verify it’s installed by running this command on a cmd prompt.

As well, the output will depend on the go version you installed and your windows version but it will look similar to this:

Once you get this message then congratulations! You’ve successfully installed go. You can begin coding go with powershell and a notepad or you can chose an ide such as Visual Studio Code. Following this idea, we will install Visual Studio Code.

Installing Visual Studio Code and setting up for Go development

So now that we’ve installed go we can start setting up the IDE for our development.

You can download Visual Studio Code from the following link:

Again you should pick the windows version that matches your environment, but in general, the download page looks something similar to the following:

As a general rule of thumb.

I recommend the system installer but that’s ultimately up to you and what you’re installing VS code on. Once you download the file run through the installation steps.

Once installed you can search for the app under the name, Visual Studio Code. As well you can open it from a cmd prompt using the following command:

Now that you have Visual Studio Code installed we can move on setting it up for our Go development.

Go development setup in VS Code

We must first go to our package manager noted by the symbol noted below.

Then we can search for the GO package by simply typing go in search.

We are looking for the “Go” package authored by “Go Team at Google”.

Once you’ve located this package simply press install and let VS code install it. If VS code prompts to install tools for Go then accept and let vs code setup thing necessary for you.

We’ve set up a simple Go language environment for Visual Studio Code on WIndows. You can also start looking at a simple introduction by following our building and running tutorial https://exploitbrokers.com/programming/golang/golang-how-to-build-and-run-golang-apps/ 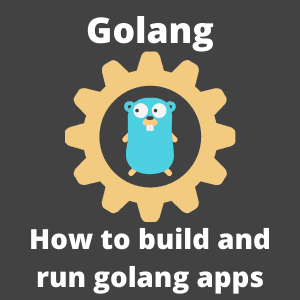 Golang, how to build and run your first Golang application is meant to be a simple introduction to building and running a simple Golang application. We will also cover some information about modules and a general overview of the building, running, and executing Golang apps.

Specifically, we will cover: go run, go build, and go install. Let’s jump into it.

Golang, how to build Golang applications and use the run and build commands.

Specifically, we will cover: go run and go build. We will cover syntax, usage, examples, and some example code you can run. This tutorial expects you to have a local golang development environment setup. If you don’t have one or want to follow along exactly you can check out our golang development setup here https://exploitbrokers.com/programming/golang/golang-setup-visual-studio-code-for-windows/.

Here is the example file we will use to show how to use the build and run commands. This is a simple application to print out a simple message.

You should copy and save this to any file name you want but it must end in a .go extension. It should look something like

We will first learn how to build golang applications using the build command built in to go. The “build” command does pretty much what it sounds like, it builds an executable that can be run at a later point in time.

The go build command will create an executable but needs the file name to be specified.

If we want “go build” to work without explicitly calling the file name explicitly then we will need to set up a go.mod which we will go over later in the article.

So if we run the command above in a windows environment we will get a file that looks like:

We can then execute the helloExploitBrokers.exe and get the following output. To execute you can use a terminal, command prompt, or if you’re in visual studio code you can use the interactive. See the image below.

Executing the executable from an interactive terminal/command prompt/etc is as simple as:

The execution above will print out our message:

Now we will learn how to make a go.mod file that allows visual studio code to run it instead of using the terminal. It’s important to note that any console apps needs console input from the user will still need to be run similar to our current application as only interactive terminals allow user input when using visual studio code.

Go’s “mod init” command allows us to set up a go.mod file which makes our current file act as a module. A module is go’s way to have packages. If you’ve ever used packages in other languages the concept is the same.

The syntax and sample usage is as follows:

Once the command is ran you will notice a new file will appear.

The file go.mod will contains something similar to the following.

This tells go that this module is named helloExploitBrokers and has a go version of 1.16. The technicalities are beyond the scope of this tutorial and are best looked up at a later point. The big takeaway is that now using’s visual studio code’s built-in run will work now.

Go’s run command makes it easier to run our code when in our ide because it essentially makes a temporary exe and runs it for us. It saves time by running the code instead of building it and making us run it manually.

The run syntax will differ slightly depending on whether you have the go.mod file setup.

If you have the go.mod file setup then you can run the following command.

The . (dot) tells go to look in the current module for the main function we set up in our earlier file.

If you don’t have the go.mod file setup then you can run the following command.

The main difference is whether you specify the file or go looks for the main function is the files.